1 – O.S.H.M.D.: a technique with great potential for the diagnosis of skin lesions

The dermatologist Renato Rossi, in exclusive for Isplad, illustrates the advantages and peculiarities of demoscopy from 170 to 400 x or Optical Super High Magnification Dermoscopy (O.S.H.M.D.), with an extensive photographic kit.

This is the first of three articles, all of which will be subsequently published on this site.

By Renato Rossi – For several years now, in the field of dermatology, the use of dermoscopy has demonstrated to facilitate the clinical recognition of various skin diseases, both of an inflammatory and infectious nature, as well as in the oncological field with the diagnosis of skin cancer.

However, despite the progress in refining image acquisition and in coding them through the research of patterns and criteria, in daily dermoscopic practice, we sometimes find ourselves faced with cases that are difficult to interpret. It becomes so arduous to decide how to manage the lesion and it would be useful to be able to go into more detail to clarify our diagnostic doubts.

At this point, we are offered the possibility of an upgrade. By changing optics and settings, in just ten seconds we are projected into the world of Optical Super High Magnification Dermoscopy (O.S.H.M.D). Let us have a look at details and aspects that facilitate and expand the interpretation of conventional images, starting from 170 x, 240 x and 300x and up to 400 x magnification, which allow us to highlight individual cells. The images are obtained from a direct optical view of the lesion and not from the digital multiplication of the conventional image.

In some respects, these images are similar to those that can be acquired with the Confocal Laser. Such images allow us to see a live enlargement close to the histological section of the pathologist.

We can have and in-depth view of the network and of the blood cells: previously unknown details that clarify the atypia such as the heterogeneity of the size of the pathological melanocytes. In the areas of clear regression melanoma, we discover the “angled nests” and the “angulated network,” with melanocytes packed into a subverted epidermal tissue

architecture. Finally, the “cellular spread” with the dispersion of melanocytes is enough for us to understand the it is melanoma.
These are some just some examples of the new patterns in high magnification resulting from the study of thousands of images confirmed by the comparison with the histological images by the dermopathologist Gerardo Ferrara.

The goal is to start forming a new dermoscopic iconography in our mind that integrates with the conventional one and that helps to improve our diagnostic skills.

Here is a series of images that open up the different perspectives of use of the 400x dermoscopy.

Touch or click on the image to enlarge it. 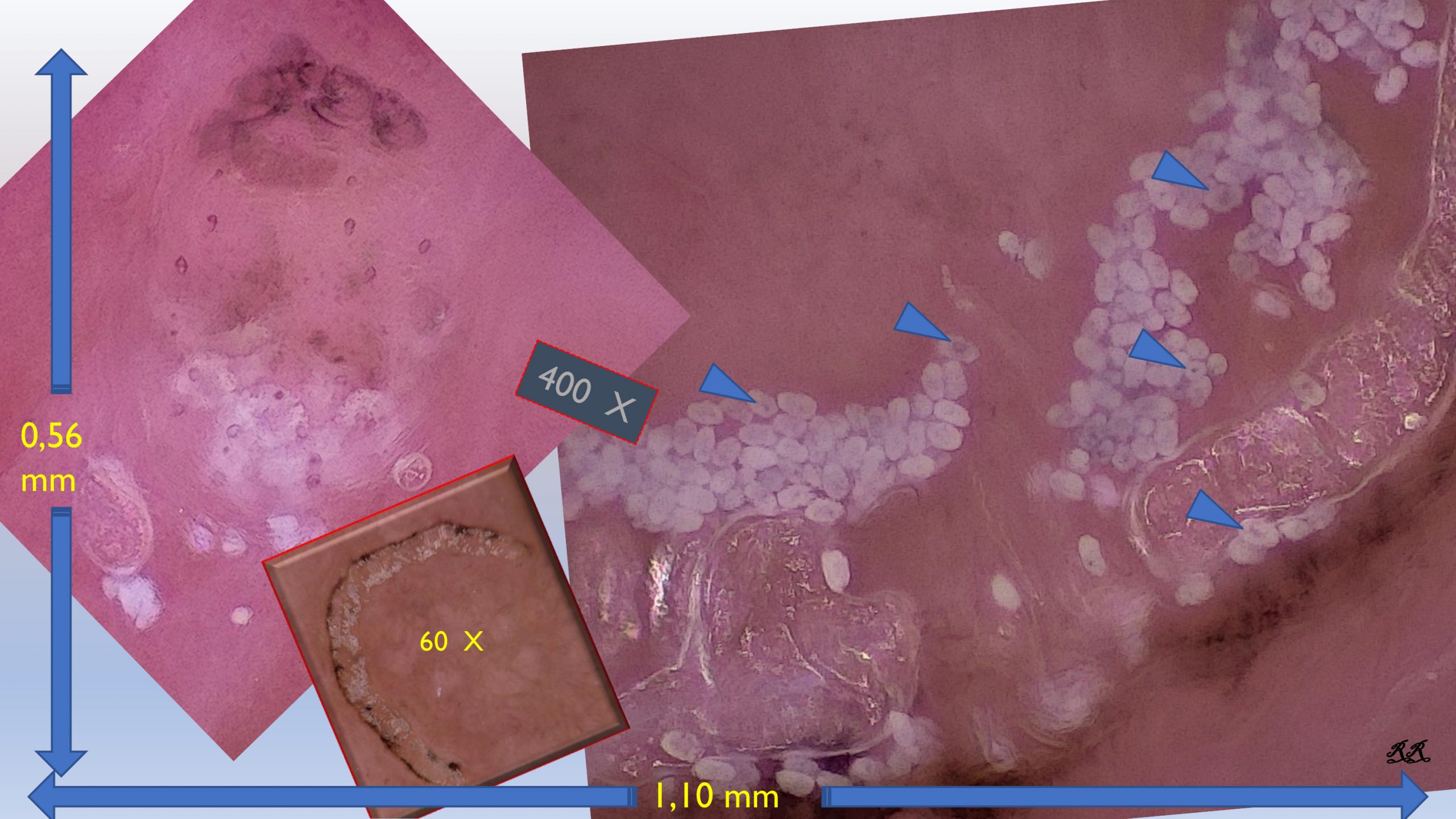 What we see at 400 x magnification on the monitor corresponds to 1 x 0.5 mm of skin surface. The high-definition of the details of the scabies goes so far as to show us the embryos inside the eggs. 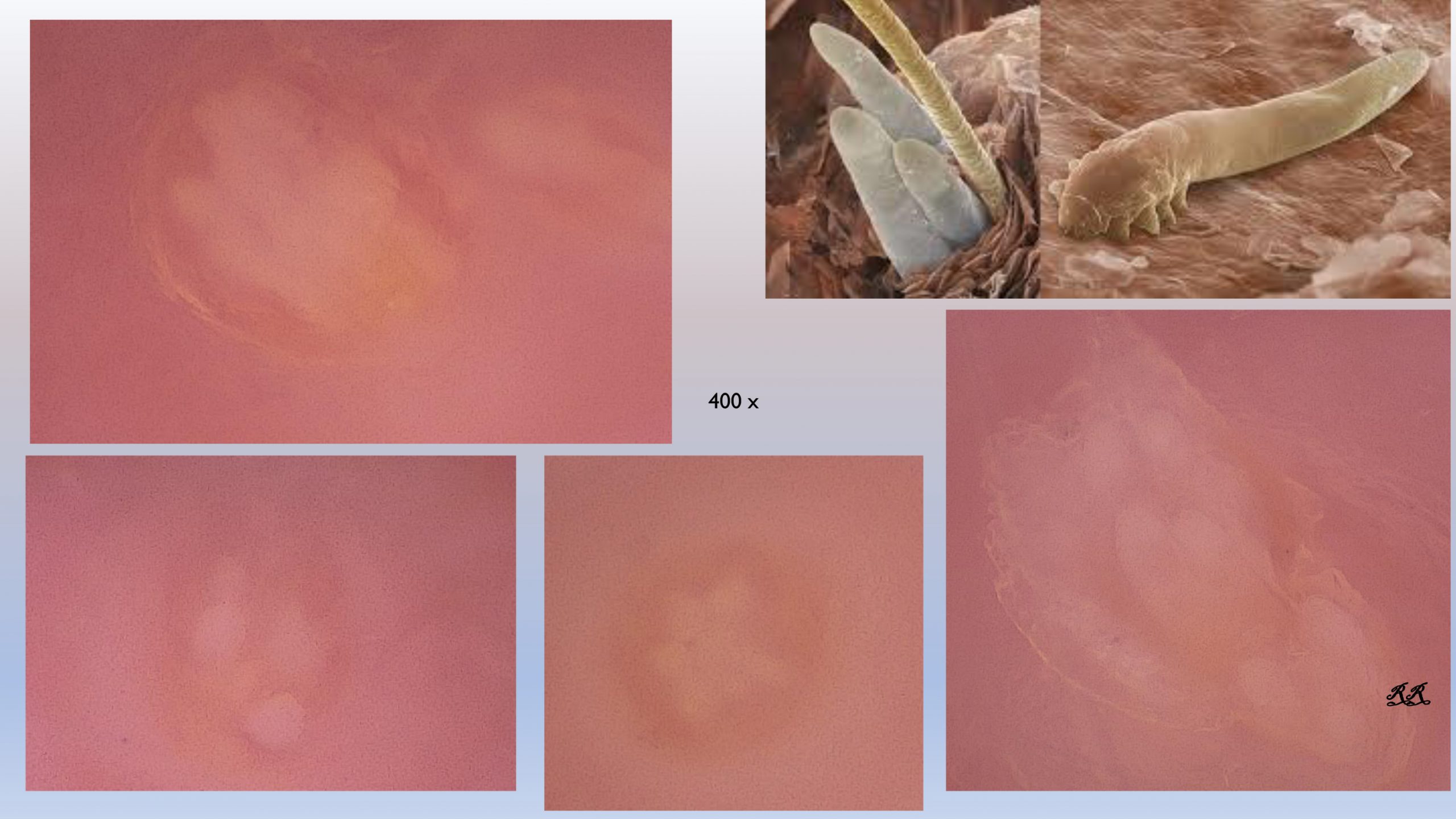 In untreated rosacea we can identify the “tails” of Demodex to confirm our diagnosis. 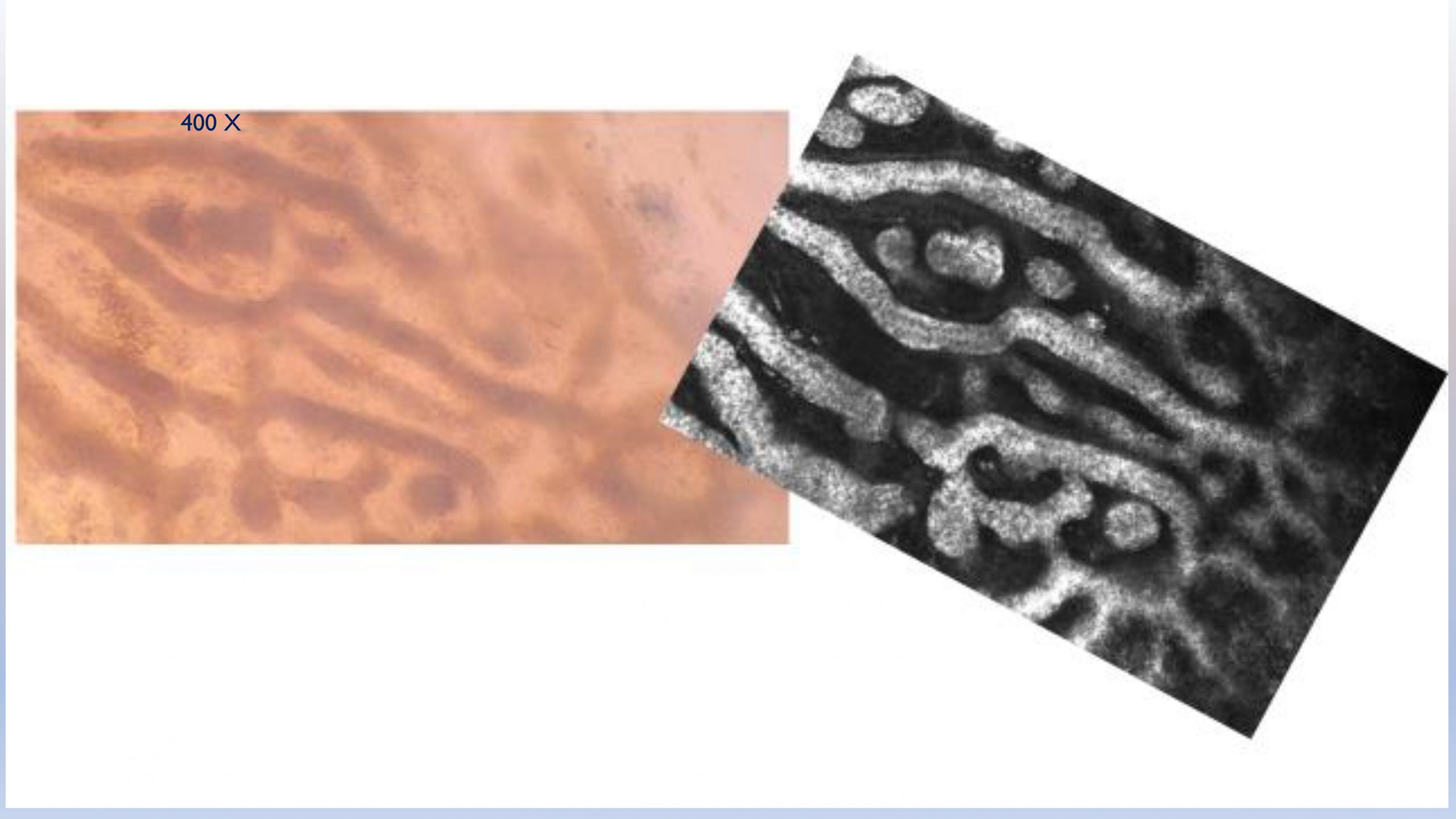 In this comparison performed by Professor Perrot, we note the similarities of the 400x image with that of the confocal laser of a detail of a seborrheic keratosis. 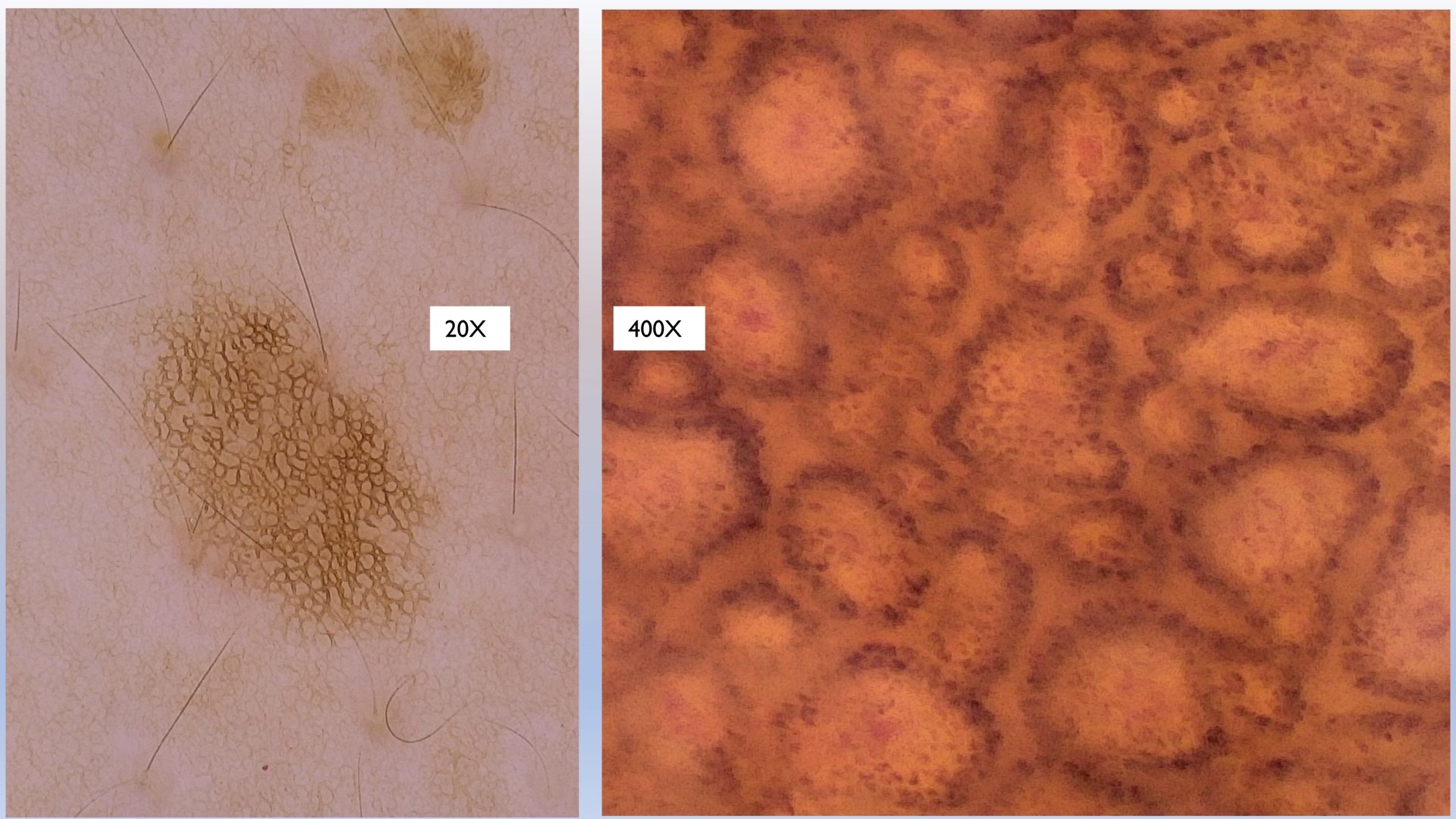 In melanocytic lesions at 400X we have a deeper view of the network: the lines appear to us as columnar melanocytes that delimit the dermal papillae; between one row and another, the lighter space (which corresponds to the central part of the “track”) is very well defined. 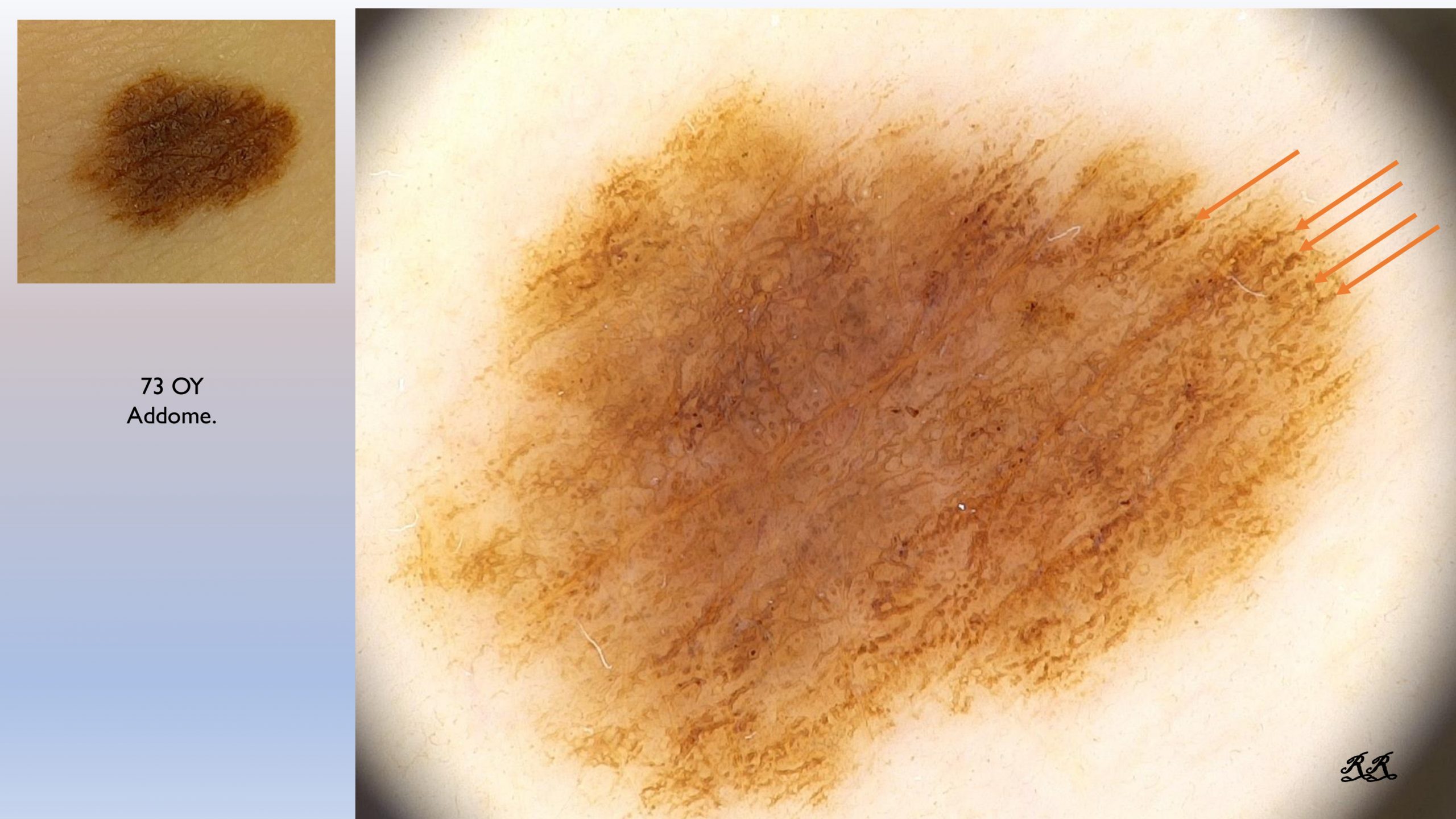 In this melanocytic lesion, indicated by the arrows, we notice some thickened, coarse lines, which terminate abruptly at the periphery; we change the setting and the optics and in a matter of 10 seconds we enter the world of O.S.H.M.D. 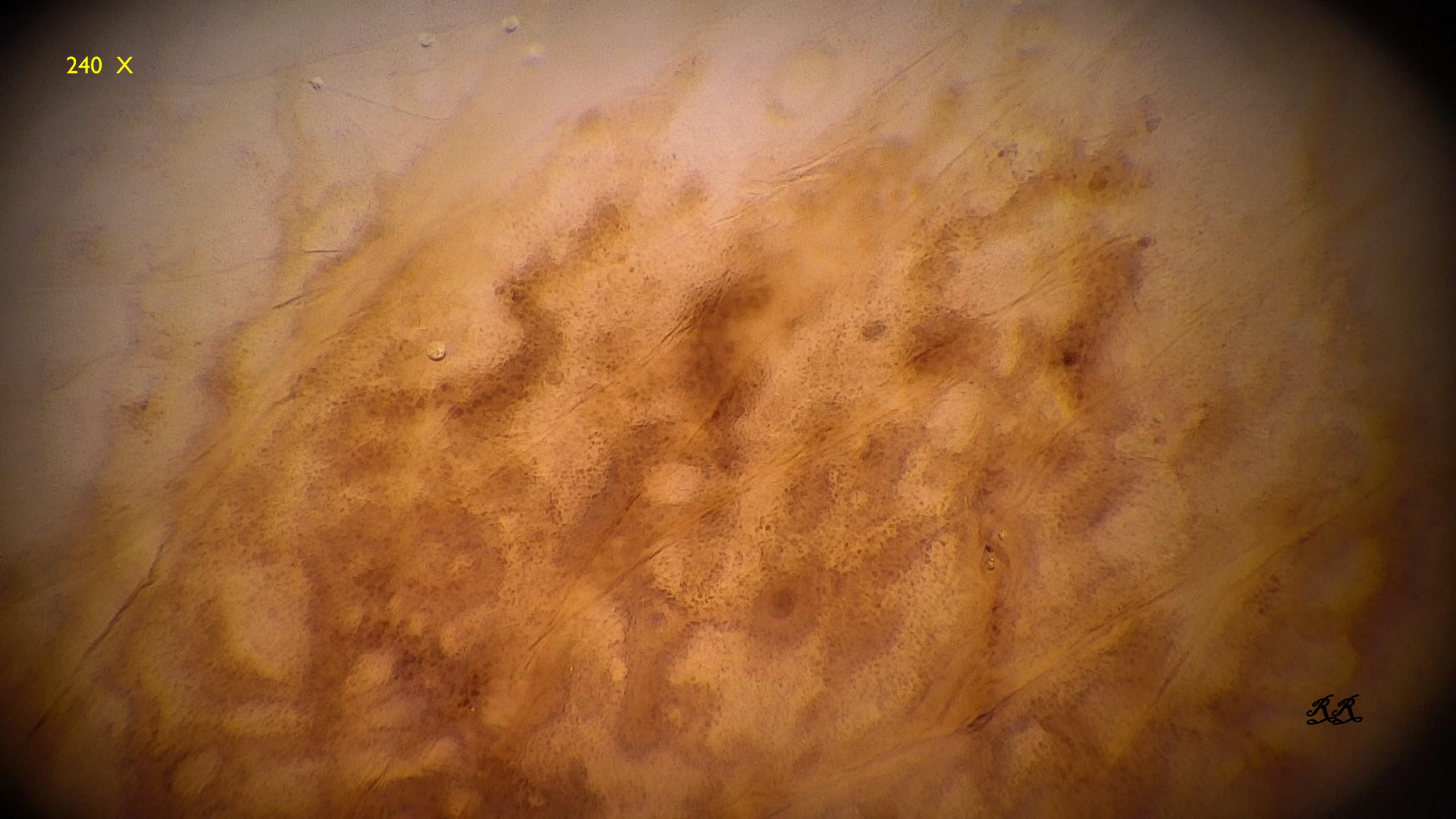 At 240x, in correspondence with the prominent lines that we saw at 20x, the light central area of the track disappears: it merges with the two lines, forming cords which we can see better-defined at 400x in the next image. 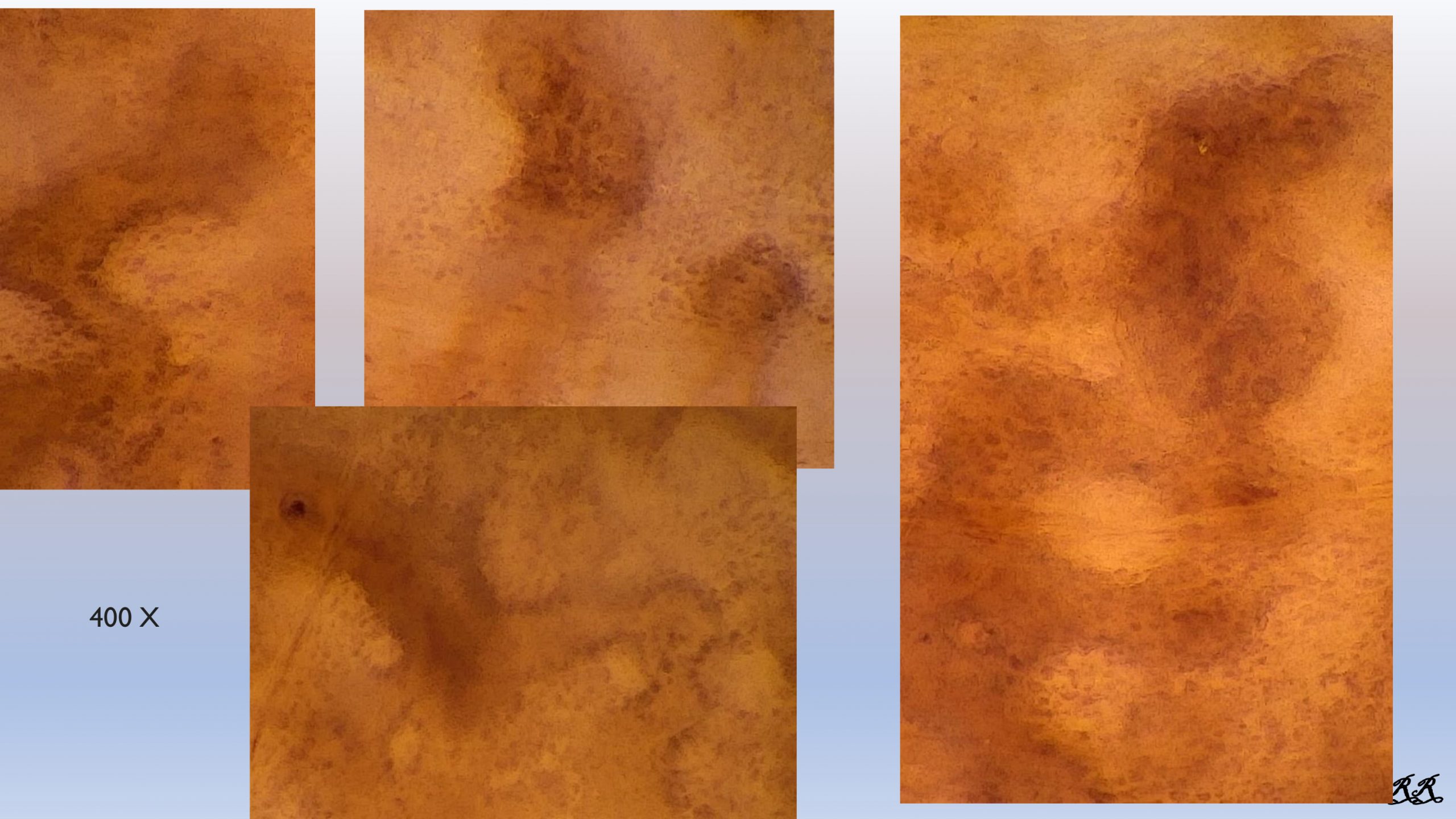 These cords are agglomerations of melanocytes that have invaded the interpapillary ridges. 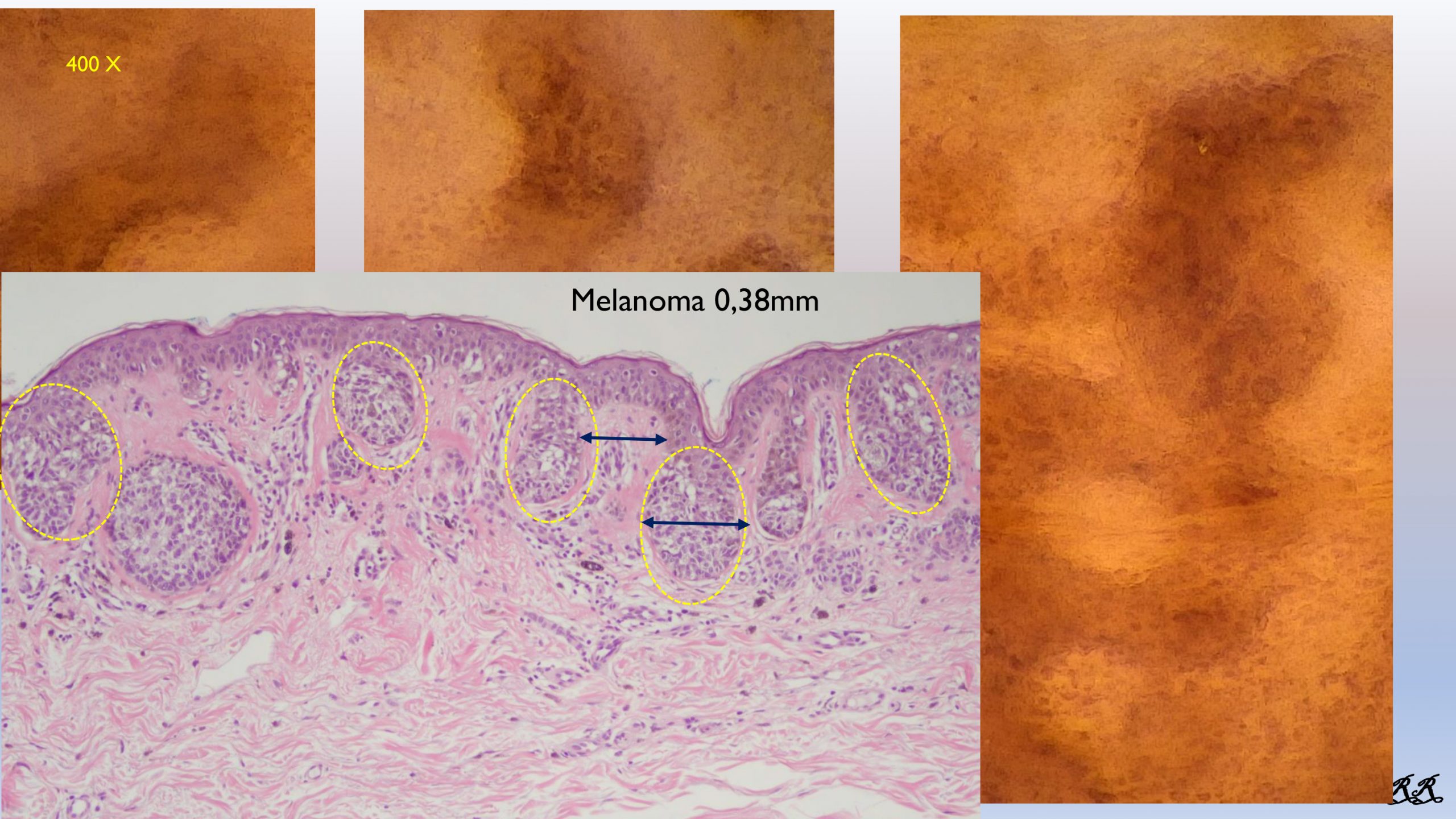 The histological image of the same area by Dr. Gerardo Ferrara shows us the pagetoid spread of melanocytes in the interpapillary crests (delimited by the yellow circles), corresponding in the dermoscopic image to the melanocytes that invade the light central area of the track merging with the lines to form the cell cords.

The prominent lines correspond with the image at 20x magnification, that is, more pigmented (with the disappearance of the track design) with an increase in thickness that can go beyond that of the apex of the papillae. 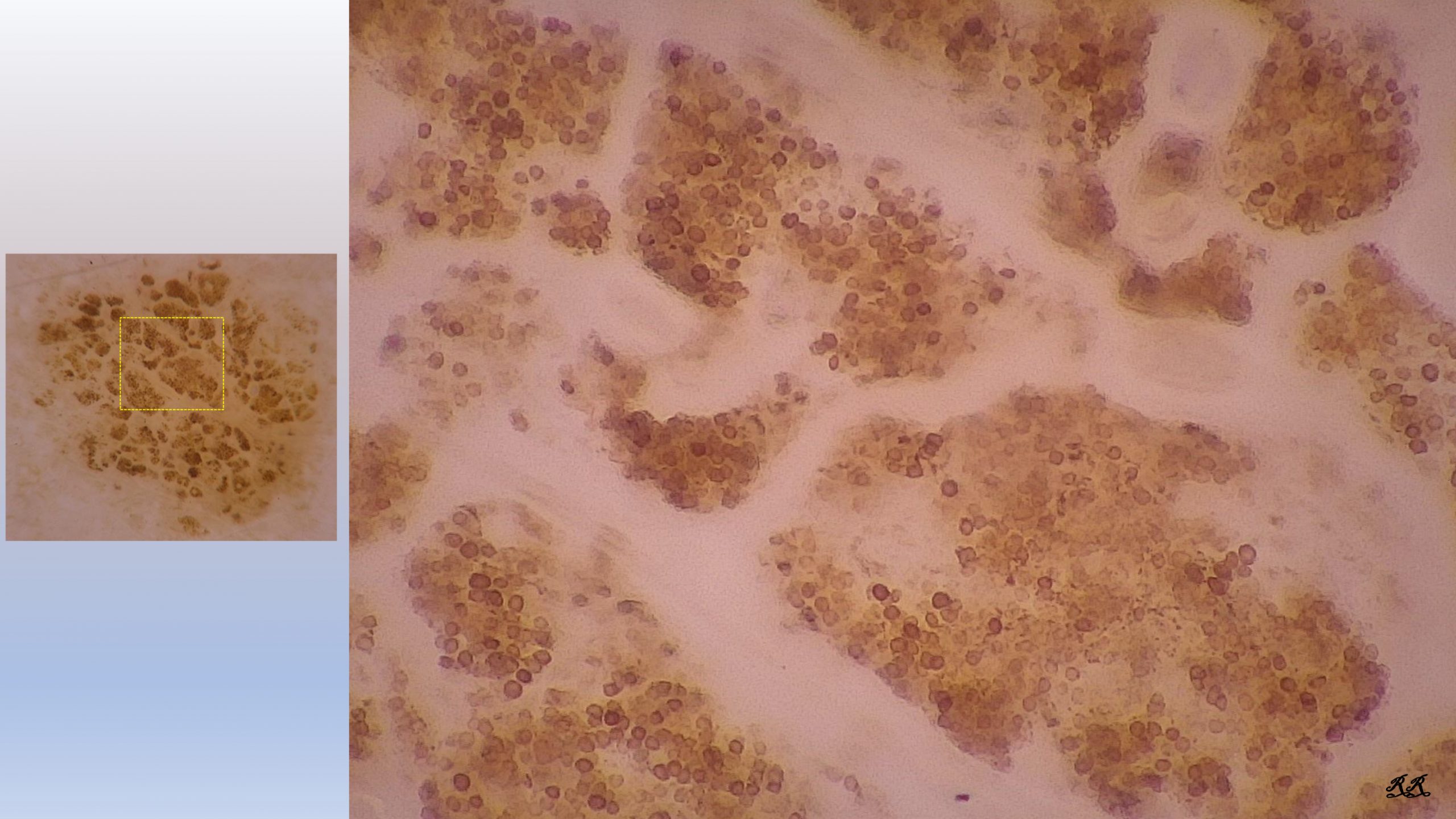 High magnification also offers us an in-depth view of the dermal nevus. It leads us inside its globules and often shows us the “Small Cyrcles:” melanocytes in the form of small circles, with the same diameter and clearly defined edges. Some are pigmented, others are clear in the center. They are diagnostic because they are found only in the dermal nevus. 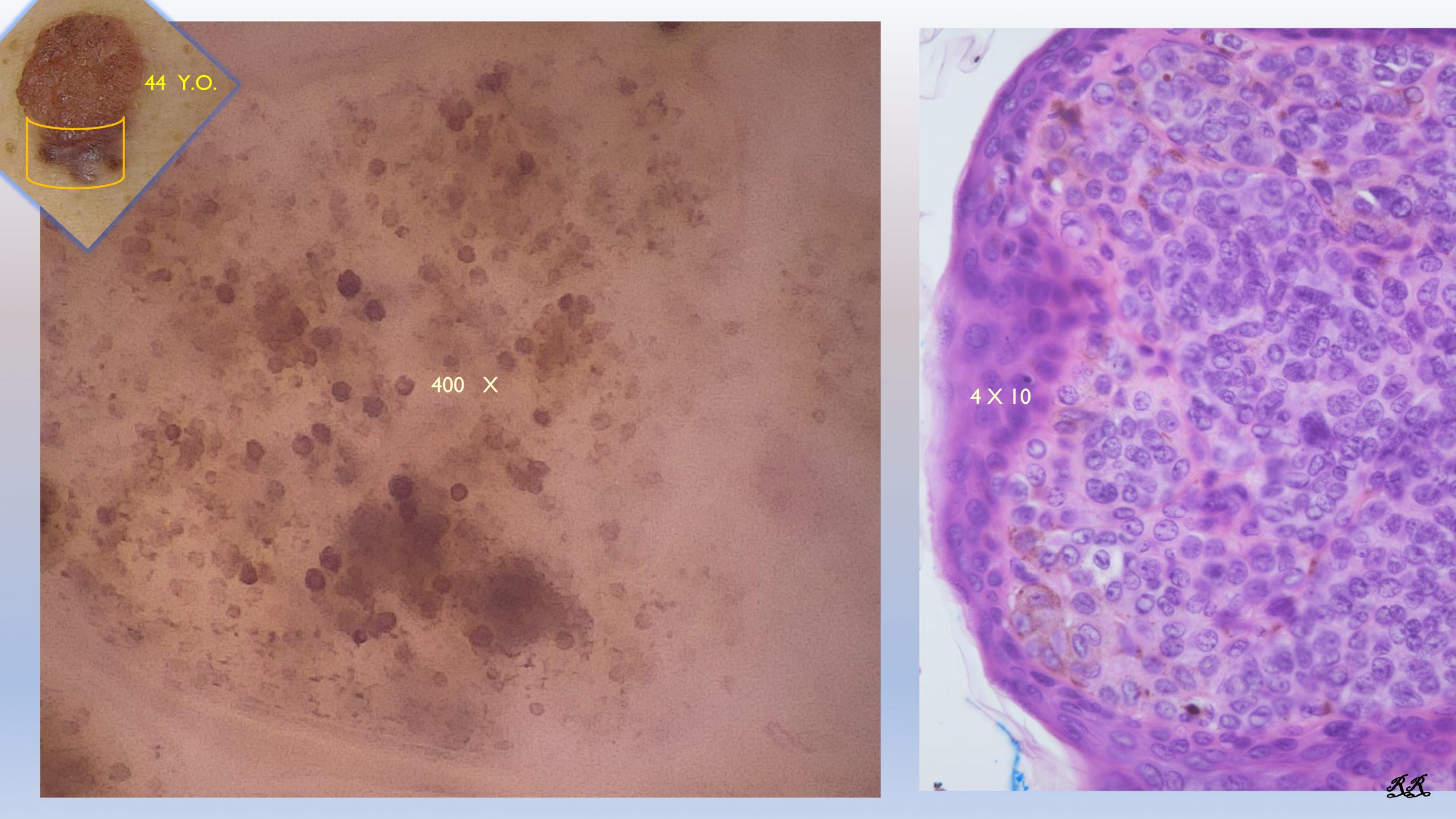 This is a dermal nevus that was removed because an appendix, which appeared in the previous months, was found to be melanoma (nevus-associated melanoma)”. On the left we see in the dermoscopic image the Small Circles inside a dermal papilla. On the right in the histological section of an exophytic papilla. At the same magnification, we can see a correspondence of the melanocytes with the Small Circles. 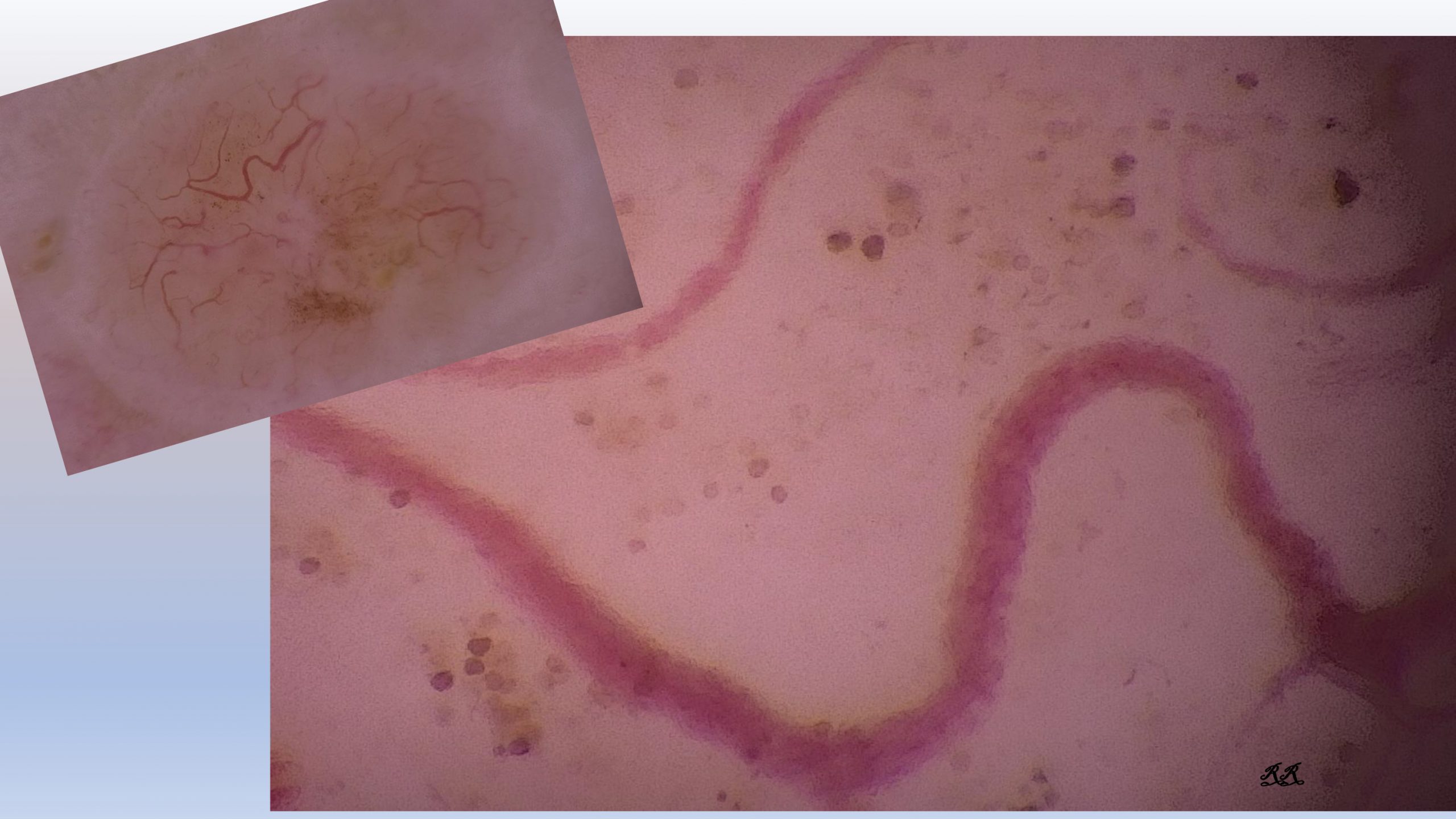 What diagnosis would we instinctively make on the dermoscopic image at the top left? Basal cell carcinoma, obviously. Instead, the 400x vision shows us widespread small circles: it is in fact a dermal nevus. 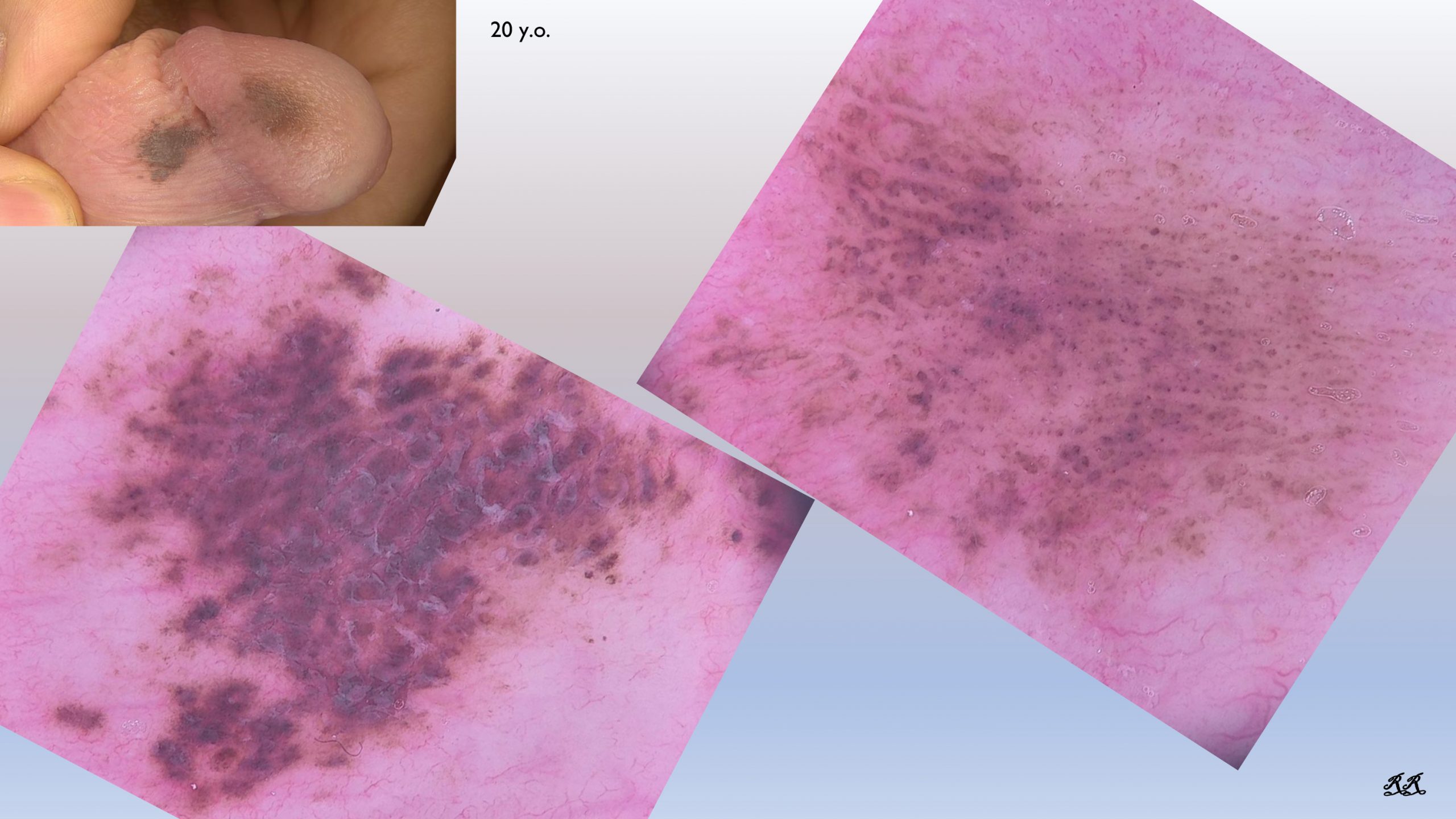 Melanocyte lesion in a 20-year-old patient in a sensitive area that is difficult to manage. The 20x image does not reassure us and a biopsy would be required. 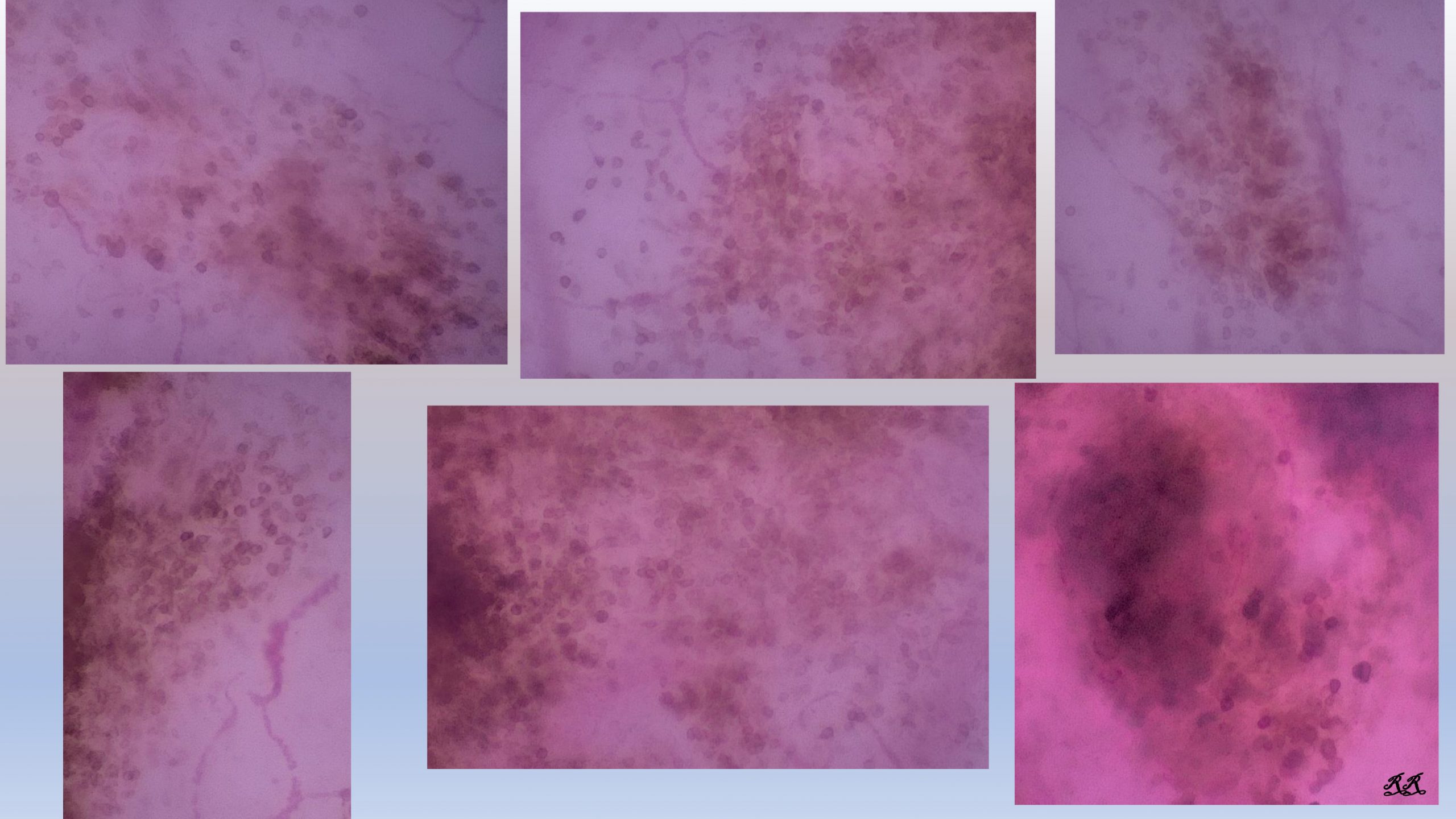 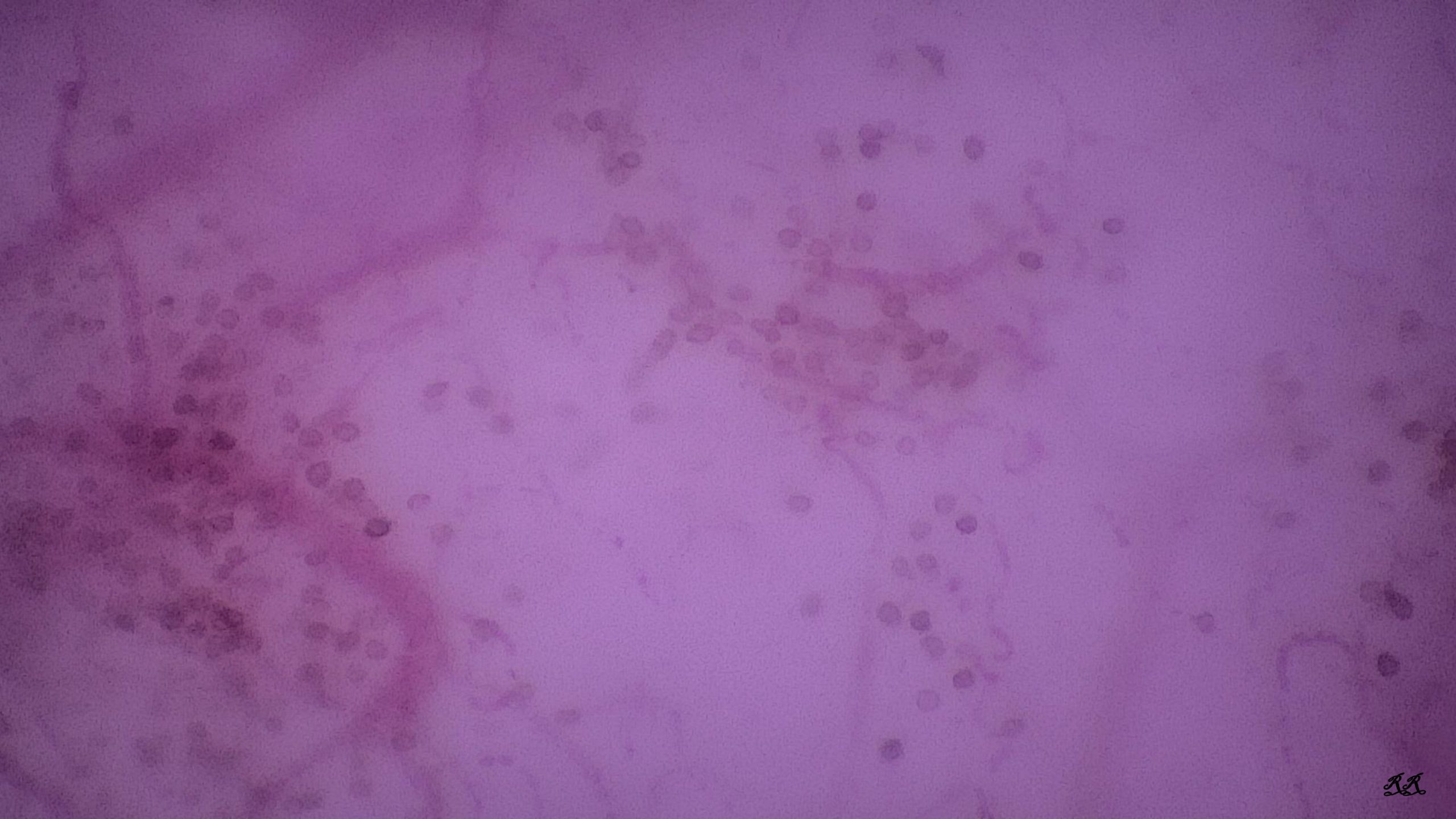 The high magnification at 400x surprisingly shows us a carpet of “Small Cyrcles”: this directs us towards the diagnosis of dermal nevus, allowing us, for similar lesions, to send them to a follow-up. 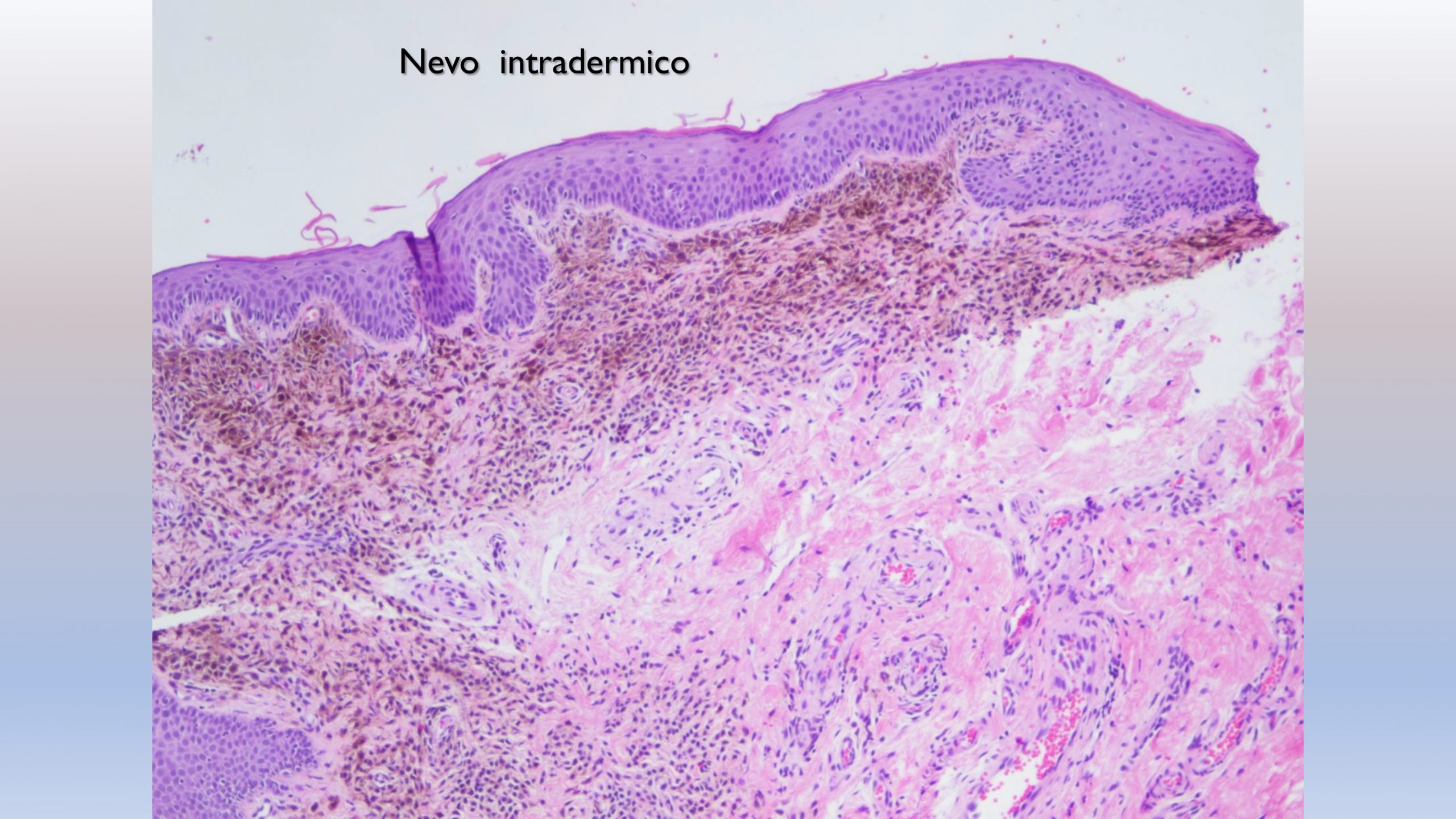 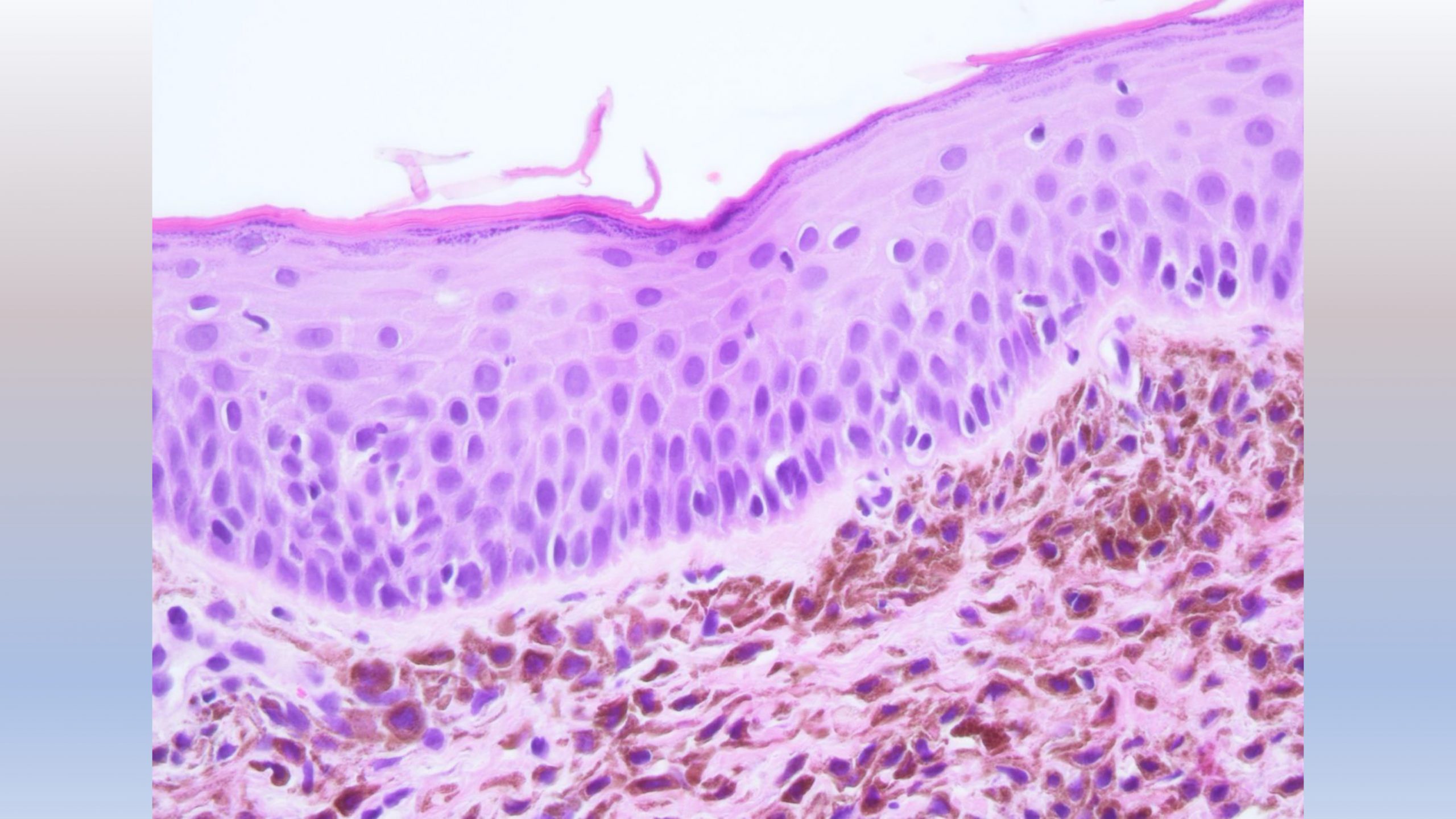 O.S.H.M.D. offers us an important insight into the network and globules to improve our diagnostic capacity.